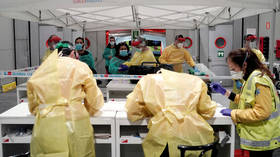 The death toll from the Covid-19 illness in Spain leaped to 1,720 on Sunday, an increase of nearly 400 in just one day, as the number of infected people soared over 28,000.

The Spanish health ministry announced the 30 percent increase in confirmed deaths and revealed that the number of Covid-19 cases in the Iberian country had climbed to 28,572, an increase of over 3,600 from Saturday’s 24,926 figure.

The one-day rise in deaths of 394 was notably higher than the previous day’s increase of 324. Health officials said that more than 1,000 have died in the area around the capital Madrid and 1,785 people are in intensive care in hospitals around the country. A total of 2,575 people who contracted the virus in Spain have now been cured.

The shocking statistics come as the coronavirus tightens its grip on Europe, with Italy recording its worst day for deaths on Saturday and Germany reporting nearly 2,000 fresh cases on Sunday morning.

Spain’s Prime Minister Pedro Sanchez said on Saturday that the government would do whatever was needed to combat the pandemic but warned that “the worst is yet to come”.

Health emergencies chief, Fernando Simon, said earlier this week that the number of infected people could actually be higher than reported as the test laboratories are “overwhelmed” and unable to process all of the samples.

Spain is Europe’s second-worst hit country after Italy and it’s fourth-worst in the world. The government closed its land borders and ordered the shutdown of all hotels in a bid to curtail the spread of the illness.

The military has been deployed in several cities in order to maintain public order and to assist with cleaning efforts. The government wants to extend the restrictions to keep them in place until the middle of April.

Did China test a whole city in 10 days?

Where China’s Economy Is Beating The Coronavirus