Why Mexico’s factories have not shut down 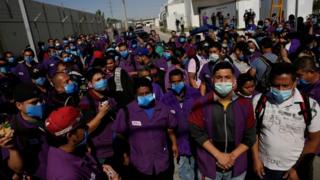 Factory workers in Ciudad Juárez rarely go on strike. Their labour rights are so weak that participating in a protest can cost them their job.

So when employees at the US-owned Regal motor factory organised a demonstration over having to work during a coronavirus outbreak, Mariana – not her real name – was initially reluctant to take part.

Earning barely $80 (£64) a month, she can ill afford to become unemployed at this complicated time.

According to Mariana, several workers in the factory died after contracting Covid-19 and that was when she decided that the issue at stake was too important to stay quiet.

“Someone who worked very close to us had a high temperature and they sent him home. Six days later he died. And now others have high temperatures,” Mariana told me on the telephone from Ciudad Juárez.

“We can’t risk bringing the virus home. In my case, I have a family member who’s diabetic, another with asthma. I’m trying to think of them.”

Conditions inside the assembly plants, called maquiladoras, are not conducive to preventing the spread of the virus, says Mariana.

“There isn’t much distance between us on the assembly line and if a machine breaks, they put us all on the same one, right on top of each other.”

The BBC approached Regal for comment but the company did not respond. On its website, Regal says it is “working tirelessly to maintain healthy and safe workplaces all around the world” amid the pandemic.

The strike appeared to have the desired effect. The staff at the Regal factory in Ciudad Juárez were told to stay at home on full pay.

Elsewhere in the border city, employees at the ECI electrical goods company also held a protest.

One employee, Monserrat, told Reuters news agency that ECI staff did not think the “essential” label should apply to the goods they make.

“Are people desperate to buy refrigerators, stoves or washing machines right now?” she asked. “Of course they’re not. The most important thing right now is to be safe at home.” ECI has not commented.

Official figures suggest that 13 factory employees in Ciudad Juárez have died with coronavirus. But a well-known activist for workers’ rights in the city, Susana Prieto, says the true figure may be three times as high.

“There is real panic among the workers,” she told me. “The factories have flagrantly disobeyed the emergency public health decree because of the absence of authority from the president and the federal government.”

Factories only started to close in Ciudad Juárez “once the bodies started literally dropping in front of their eyes”, says Ms Prieto.

With so many maquiladoras shuttered, the cross-border supply chain in North America has been crippled. It has prompted the National Association of Manufacturers in the US, a group comprised of scores of US manufacturing companies, to write to Mexican President Andrés Manuel López Obrador to urge him to reclassify more industries as essential so their factories can operate again.

The association’s controversial call was echoed by the Trump Administration.

The US Undersecretary of Defence for Acquisition and Sustainment, Ellen Lord, said last week that she had contacted Mexican Foreign Minister Marcelo Ebrard “to ask for help to reopen international suppliers there”.

“These companies are especially important for our US airframe production,” she added.

Mexico has now reached an agreement on reopening factories in the automotive industry in coordination with the US and Canada.

Susana Prieto thinks that the emergency decree has given priority to the wrong products, those for export to the US, Britain, China and Korea, rather than those needed by Mexicans.

While factories producing medical supplies and equipment and agricultural goods are obviously needed in this current crisis, she argues that production for exports for the US automobile or aerospace industries should not be exempt.

“These factories should be closed,” she says, her voice rising in anger. “But we live in no-man’s land where the laws are made to be broken.” 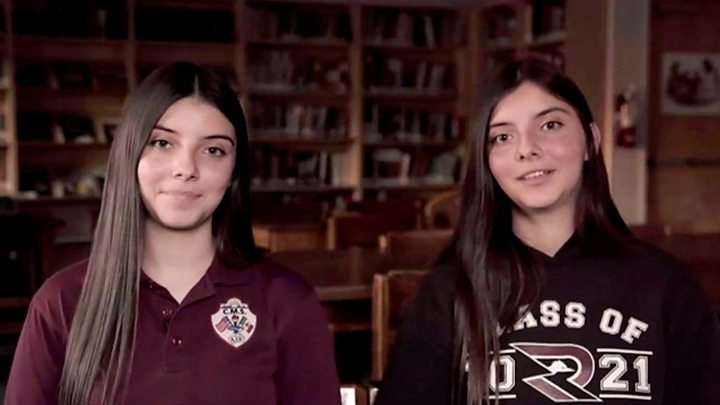 Media captionCrossing the border to go to school in the US

US Ambassador to Mexico Christopher Landau believes a balance can be struck: “It’s possible and essential to look after the health of workers without destroying those [supply] chains,” he wrote on Twitter recently.

Perhaps, but there are some 300,000 factory workers in Ciudad Juárez. Given the poor conditions inside many maquiladoras, employees are understandably wary of going to work in the middle of a global pandemic.

They know that the manual labour they perform is vital to the health of the economy on both sides of the border. It is just that right now their own health and that of their families is far more important to them.