Only four countries in Europe are below a critical coronavirus threshold

The European Centre for Disease Prevention and Control’s (ECDC) coronavirus alarm threshold is 20 cases per 100,000 people on a seven-day average. Beyond that, the agency says, the risk of Covid-19 is high, with a very high probability of infection, while vulnerable individuals face a “very high impact” from the disease.

The death rate has also been rising in Europe and sustained increases in case levels have been recorded in 27 countries, the agency said Thursday in its weekly report.

Meanwhile, European Commission President Ursula von der Leyen is self-isolating after participating in a meeting that was attended by a person who subsequently tested positive for Covid-19. She tested negative for the virus for the second time on Monday.

And the health authority in England admitted that thousands of infections had not been included in the UK’s coronavirus case tally due to a “technical issue.”

Paris is on the verge of a fresh lockdown as coronavirus cases surge in France.

Prime Minister Jean Castex confirmed that the greater Paris area will be classified as a “maximum alert” zone, forcing bars to close, with measures in effect from Tuesday.

A press release from Castex’s office said the region has crossed the three thresholds that would put it in such an alert category: disease incidence rate, incidence rate for the elderly and occupancy rate of resuscitation beds by Covid-19 patients.

As part of measures expected to stay in place until October 16, restaurants will remain open providing they respect new health measures, but gyms will stay closed and the sale and consumption of alcohol in public spaces after 10 p.m. will be forbidden, Paris police chief Didier Lallement said. Organized public gatherings of more than 1,000 and gatherings of more than 10 will be banned, although demonstrations will be allowed, Lallement said.

On Saturday, the country recorded 16,972 new Covid-19 cases over 24 hours, surpassing last week’s previous daily record. According to Aurélien Rousseau, the head of Paris’ health authority, more than 36% of ICU beds in the region are currently occupied by Covid-19 patients.

If introduced, Level 5 restrictions would see all retailers except those deemed essential closed, while social gatherings would be restricted and people restricted to exercising within 5 kilometers of their homes. 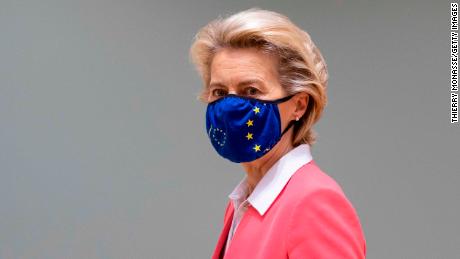 European Commission President Ursula von der Leyen is self-isolating after participating in a meeting that was attended by a person who subsequently tested positive for Covid-19, she announced on Twitter.

Under Belgian government rules, von der Leyen is required to quarantine for seven days after coming into contact with a Covid-19 positive person.

Czech Republic in state of emergency

A state of emergency has been introduced in the Czech Republic — which saw some initial success in curbing the spread of the virus — to help to curb the country’s accelerating growth of new Covid-19 cases, and to to relieve pressure on the health care system as a total of 1,841 new cases were recorded on Sunday.

The 30 days of measures — the second state of emergency implemented this year — will enable the authorities to legally declare and enforce various anti-coronavirus measures without government approval, according to the health ministry.

According to the restrictions, which are not as as draconian as they were during the first state of emergency from March to May, primary schools will remain open but secondary schools will close in the most affected areas for two weeks. Singing is banned in all schools, while no more than six people are allowed at tables in bars and restaurants, which can remain open until 10 p.m. 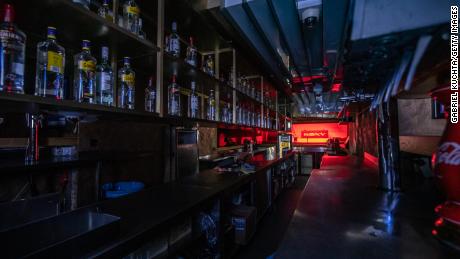 No more than six people are allowed at tables in bars and restaurants in the Czech Republic, which has implemented a second state of emergency.

Thousands of cases were missed off UK figures

The number of reported coronavirus infections in the UK jumped on Sunday to a new daily record of 22,961 on Sunday, nearly double the previous record for a single day, as it emerged that thousands of infections were not included in previously published daily figures, according to Public Health England (PHE).

The agency admitted that they failed to report a further 15,841 positive cases between September 25 and October 2 because of a “technical issue,” it said in a statement. The majority of these cases occurred in recent days, PHE said.

The UK’s opposition Labour Party criticized the government’s failure to report the infections at a time when a second wave of positive cases are being seen across the country, calling the mistake “shambolic.”

Sunday’s significant increase in reported cases means the UK’s total has now surpassed more than half a million infections since the start of the pandemic.

Sections of central Berlin at risk

Large parts of central Berlin have been classified as risk areas after the areas surpassed the country’s crucial incidence rate of 50 cases per 100,000 inhabitants.

The districts — Friedrichshain-Kreuzberg, Mitte, Tempelhof-Schoeneberg and Neukoelln — have been labeled red on the website of the Robert Koch Institute (RKI), the German agency for disease control and prevention. As of Monday morning, Germany has more than 300,000 coronavirus cases, according to the RKI. The death toll has climbed to 9,534.

New restrictions came into effect in Iceland on midnight on October 5, as virus cases have continued to rise since mid-September. According to the restrictions, in force until October 19, gyms, pubs, clubs and casinos are to be closed, and no more than 20 people can gather, with some exceptions including for parliament and funerals.

Primary and secondary schools will remain open as usual, but colleges and universities will not permit more than 25 people in the same space.

Coronavirus Outbreak: Thoughts From the UK