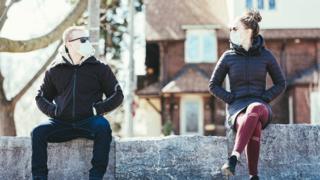 Groups of up to six people who do not share a household in Northern Ireland will be allowed to meet outdoors, the executive has said.

Ministers have agreed to ease more lockdown restrictions as part of the first step of their recovery plan, so long as social distancing is followed.

Garden centres and recycling centres have already been allowed to reopen.

Churches and places of worship can open for private prayer and some sports, such as golf and tennis, can restart.

Other outdoor activities that do not involve shared contact with hard surfaces, including some water sports, will be permitted, as more and public sports venues and outdoors spaces can reopen.

The Golfing Union of Ireland has said golf will return in Northern Ireland on Wednesday.

Drive-in church services and drive-in cinemas, as well as drive-in concerts, will also be permitted.

First Minister Arlene Foster said the executive did not agree to allow people to visit immediate family indoors, where social distancing is possible, even though it is included in step one of the Pathway to Recovery plan.

She said she understood that would be disappointing for some people, but she gave a “commitment” to keep the restriction under constant review.

“We would have liked to unlock the whole of step one but, quite simply, the reason why we haven’t been able to move to indoor family gatherings is because of the medical advice,” said Mrs Foster.

“The relaxations we’ve announced have been made made possible by the vast majority of you following advice.

“They have been hard-won freedoms and it’s vital when you exercise them, it doesn’t put anyone else’s safety at risk.”

On Monday, the Department of Health announced six more Covid-19 related deaths in Northern Ireland, bringing its total to 482.

A separate weekly report from the Northern Ireland Statistics and Research Agency (Nisra) showed that 599 deaths had been recorded, up to 8 May, in total, because its figures record all fatalities where coronavirus is mentioned on a death certificate.

“Bear with us,” urged Deputy First Minister Michelle O’Neill, who said as soon as the advice changed, the executive would move to lift the restriction on visiting family indoors.

In other developments on Monday:

“We will get there and we’ll get there sooner, if we all keep doing what we’re doing,” she added.

Last week, the executive published its five-phase blueprint for recovery in Northern Ireland, but it did not have a timetable.

The lockdown remains in place with a review due by 28 May, but some aspects of the first stage of the executive’s plan were allowed to begin on Monday morning.

There were lengthy queues at some recycling centres that reopened, with Derry City and Strabane District Council appealing, via social media, for people to put their journey off until later in the day.

Marriage ceremonies where a person is terminally ill are also allowed.

Mrs Foster said the executive is considering the issue of small weddings and that she hoped the executive could make a decision on that “in the very near future”.

She also said the decision to reopen religious venues for prayer, and golf courses, had been deemed “sufficiently low-risk”.

“Golf clubs will be relieved players will be returning to their fairways,” said the first minister.

Ms O’Neill said there would be “no restrictions on travelling” for any of these activities, but stressed that people availing of any services must use common sense as keeping at least 2m apart from non-household members still applies.

He said churches were taking many steps to ensure priests complied with health and safety guidelines, including installing CCTV cameras.

“It’s important for people who’ve been bottled up for the past eight weeks to have a chance to talk to a priest, and ensure people can pray quietly should they wish to unburden themselves,” he added.

On Monday, garden centres and recycling centres were allowed to reopen, with lengthy queues developing at some sites.

Some recycling centres, which are managed by Northern Ireland’s 11 councils, had already put safety measures in place and reopened ahead of the executive’s announcement last week.

Derry City and Strabane District Council appealed, via social media, for people to put their journey off until later in the day.

On Monday, the Republic of Ireland began phase one of its recovery plan, and it is similar to that outlined by the Stormont Executive.

But people are only allowed to meet outdoors in small groups of up to four, and social distancing must also be observed.

Coronavirus warning: France will be ‘overwhelmed’ by deadly virus unless Macron acts NOW