We’ve launched a new blog at the link below – head there for the latest:

Here is a quick recap of recent events from the UK and around the world:

France is unlikely to avoid the new and more contagious “UK variant” of the coronavirus, and may have to consider more restrictions on people’s movements next week, the government’s chief scientific advisor on the epidemic said on Wednesday.

“In the UK it started in September. It took two and a half months to reach 60% of the virus currently circulating and if we see the same model in France, we will see a relatively rapid spread … I think we cannot avoid it,” Delfraissy said on France 2 television.

He added that the country needed to be worried about this new variant, even if it is not yet circulating in the country in a major way.

“We must do what we can to stop it, but I think we cannot avoid it. We need to slow it down as vaccinate in the mean time,” he said.

England and Wales recorded the most deaths in 2020 of any year in more than a century, with the pandemic leading to a rise in the number of excess deaths, a senior statistician has revealed in a sobering analysis.

Some 604,000 deaths were registered in the two nations in the last 52 weeks, about 73,000 or 14% above the five-year average, Nick Stripe from the Office for National Statistics said on Twitter (see full thread).

Tunisia recorded 2,820 new confirmed coronavirus cases, the health ministry said on Wednesday, a record since the start of the pandemic last year.

Seventy more deaths were reported, taking the death toll to more than 5,000, the ministry added, while the total number of cases has jumped to around 150,000.

Tunisia banned travel between the country’s regions, and extended a curfew in October, as it tried to stem a tide of surging Covid cases threatening to exceed hospital capacity. 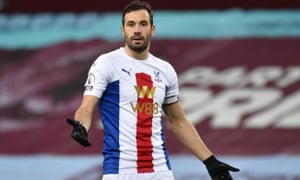 Palace manager Roy Hodgson was among those who condemned the Serbian mildfieder’s actions, after social media pictures surfaced of him at a gathering with at least seven other people.

At the time, London was under strict tier four Covid-19 restrictions, in which households could not mix.

“I want to publicly apologise for my actions on New Year’s Eve,” Milivojevic, 29, said on Wednesday.

As captain of Crystal Palace Football Club, I am fully aware that my responsibilities go beyond football, and that in this instance I have let the fans, the club, my manager and team-mates down. In what is a really difficult and challenging moment for everyone, I am truly grateful that I am able to continue to do the job I love and I do not take this for granted. I am very sorry to anyone who has been made to feel angry, hurt or upset by my actions. I am making a donation to the local NHS service to help them continue their incredible work in our community fighting this virus.

Arizona has become the Covid “hot spot of the world”, public health experts have warned five months after president Donald Trump held up the US state’s pandemic response as exemplary.

“It’s way worse than July already, and it’s going to continue to get worse. We’re probably two weeks behind LA in terms of our situation,” Will Humble, head of the Arizona Public Health Association, said referring to Los Angeles County, where a coronavirus surge has created a shortage of oxygen.

The situation has led ambulance crews to stop transporting patients they can’t revive in the field, with one out of every 119 people in the state testing positive in the past week.

Arizona, which now has the worst coronavirus diagnosis rate in the country, has seen a triple-digit number of new virus-related deaths for the second day in a row and more than 7,200 daily cases, according to health officials.

As hospitals increasingly face being overwhelmed, pressure is mounting for the introduction of more forceful control measures such as mandatory statewide masks.

But Humble said he doubts Republican Gov. Doug Ducey- who has rejected calls for tighter curbs by claiming they would risk jobs- will change anything.

Under current rules, indoor dining is allowed and gyms are open at limited capacity. Ducey has dismissed a proposal to have all public schools switch to virtual learning for two weeks after the holidays.

The International Olympic Committee is working on ways to get athletes the Covid-19 jab in the second or third wave so that the Tokyo Games can go ahead safely in July, the Guardian understands.

Impatience about the pace at which vaccines are being rolled out to front line health workers is growing among some governors in the US, the Associated Press reports. 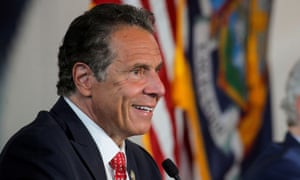 Andrew Cuomo, the high-profile New York governor, is threatening to fine hospitals that don’t use their allotment of the Covid-19 vaccine fast enough.

His counterpart in South Carolina, meanwhile, says hospitals and health care workers have until 15 January to get a shot or move to the back of the line.

Elsewhere, California’s governor wants to use dentists to dispense shots, amid mounting frustration over the sluggish distribution of the vaccine.

An NHS hospital doctor has criticised the government’s decision not to bring in a lockdown before Christmas, as she told of “unimaginable” hospital conditions.

We have ambulances queuing up outside – patients we can’t get them out of the ambulances into hospitals because every single bed in intensive care, in the wards, in A&E is full. Tonight I had messages from a doctor in London to tell me that police cars are delivering critically-ill Covid patients into his hospital in London because there are no ambulances. That is how bad things are.

She added that ministers should not have “ignored” the advice from Sage when they suggested as early as September a “circuit breaker” was required to prevent an explosion of Covid cases.

Members of the public breaking Covid rules should first be encouraged to comply with the law, new guidance from the College of Policing and National Police Chief’s Council suggests.

“Enforcement can follow without repeated attempts to encourage people to comply with the law,” it says.

There are fines of £10,000 for organisers of restricted gatherings.

More Americans were hospitalised with Covid-19 on Wednesday than at any time since the pandemic began, as total coronavirus infections crossed the 21 million mark.

US coronavirus hospitalisations reached a record 130,834 late on Tuesday, according to a Reuters tally of public health data, while 3,684 reported fatalities was the second-highest single-day death toll of the pandemic.

That grim toll meant that on Tuesday someone died from the virus every 24 seconds in the country.

Hi everyone. It is Yohannes Lowe here. I will be running this blog into the evening, so feel free to message me on Twitter with any story tips.

Six cases at NZ border have had new Covid-19 variant, 19 cases in total in the past three days