Can live-streaming save China’s economy? 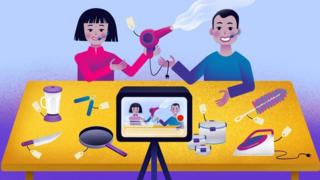 “I’m a bit nervous,” confessed Li Qiang, the deputy mayor of Wuhan, the Chinese city where the coronavirus was first reported late last year, as he awaited the start of his first-ever live-streaming event.

It is not the kind of tone one often hears from a senior Communist party official. But in an effort to revive China’s economy after the devastating epidemic, Mr Li was determined. He spoke fondly of his long appreciation of Wuhan’s local delicacy, hot and dry noodles, and urged locals to frequent his favourite shop.

The two-month-long nationwide lockdown has taken a heavy toll on the economy. It shrank 6.8% in the first three months of 2020 – the first time the country’s economy has contracted since the death of Chairman Mao in 1976.

But unlike then, Chinese politicians are more pragmatic these days, particularly as the once fast-growing economy is entering uncharted waters.

In a provincial-wide campaign to revive the economy, senior officials in Hubei province – home to 60 million Chinese – are turning themselves into online streaming celebrities. Mr Li and his colleagues are endorsing local brands and paying close attention to sales figures.

And the result? Chinese media reports say that on the first day of the campaign – 8 April – these live-streaming sales across the province garnered 17.9m yuan ($2.5m; £2m). They sold nearly 300,000 items in nine hours – including 44,000 portions of Mr Li’s favourite hot and dry noodles.

Hubei is not the only province taking advantage of China’s booming live-streaming industry. Many local officials in Hunan, Shandong and Guangxi provinces have also turned themselves into sales gurus since social distancing became a rule in China. They endorse local products to help revive the economy – while showing a different side of Communist party politicians to their constituents.

Sales through live-streaming during the epidemic “definitely provided hope and a new outlet for companies to start investing in marketing, which supports the service industry and other industries as well,” says Andrea Fenn, CEO of Fireworks, a Shanghai-based marketing consultancy.

Yet this business model is not just a top-down effort. Even before party officials began appearing on live-streaming services, savvy business owners were turning to live-streaming platforms such as Douyin (the equivalent of TikTok in China) and Kuaishou, as well as e-commerce giant Alibaba’s Taobao, to promote and sell their products in real time.

One of them is 27-year-old Li Jiaqi, whose maverick sales technique has won him the nickname “Lipstick Brother No 1”. Once an unassuming shop assistant earning a modest salary in Nanchang in south-east China, he now has more than 40 million followers on Douyin.

In one of his live-streaming sales sessions he sold 15,000 lipsticks within five minutes. Unlike many beauty bloggers he always demonstrates the lipsticks he’s selling on his lips, rather than his arms. It seems to be paying off, as he now reportedly has a net worth of up to $5m (£4m).

There is also 33-year-old Wei Ya, whose 1 April sale of a $6m rocket launch on Taobao amazed the nation and attracted international publicity. So much so that Taobao had to issue a statement confirming the sale was real and not an April Fools’ joke.

Wei Ya has been a familiar face in China’s live-streaming sales circle. Her followers call her “Queen of Goods”.

The official China Daily says this was “the world’s first live broadcast of a rocket sale”. More than 620,000 Weibo users have used the hashtag #WeiYaSellsARocket and more than two million online viewers tuned in to watch the sale.

Can it save China’s economy?

Foreign brands too have been joining in. Luxury product maker Louis Vuitton hosted a live-streaming sale in March – the first time since the brand entered the Chinese market 30 years ago.

At the height of China’s Covid-19 epidemic, in February alone Taobao, the platform which sees the largest number of live-streaming sales, saw an increase of 719% in new sellers across the country.

Not everyone will succeed, though. Marketing consultancy boss Andrea Fenn says that despite the recent frenzy, the market is getting increasingly crowded.

“Early adopters were able to obtain results with [often quite amateurish] live-streaming activities because the phenomenon was quite new and fresh.

“Now there are thousands of live-streamings out there and consumers are starting to wonder how come we have gone back to a communication activity that looks much like a 1990s telemarketing show.

“I am seeing more and more companies failing in their ability to increase sales through live-streaming due to consumer fatigue.”

One of China’s most successful online celebrities can probably attest to that. In April, 48-year-old former English teacher – and now internet celebrity – Luo Yonghao made the news with his inaugural live-streaming sales event.

It attracted 50 million viewers across China and within three hours he had rung up a staggering sales figure of $15.5m.

Over the next fortnight Mr Luo used live-streaming twice more to sell goods, but with much less success. Chinese media say the number of his viewers and sales figures plummeted – by 83% and 48% respectively.

Andrea Fenn says, for him, all this confirms that “I don’t think we are looking at something that alone can sustain an economic boom”.

Study Suggests Coronavirus Emerged Much Earlier Than Thought. Some Are Skeptical.

Study Suggests Coronavirus Emerged Much Earlier Than Thought. Some Are Skeptical.