Did China test a whole city in 10 days? 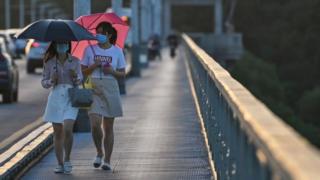 China has completed a mass testing programme in Wuhan, the city where the Covid-19 pandemic began.

The authorities had pledged to test the entire city over a 10-day period after a cluster of new infections arose.

We’ve looked at the original plan, and what was achieved.

What was the target?

Wuhan has an estimated population of 11 million people, so aiming to test everyone in 10 days would have been an ambitious target.

But those already tested in the seven days prior to mass testing starting, as well as any children under six years of age, were excluded from the programme.

The total number of tests needed may have been reduced further given that some residents who left Wuhan before the lockdown in January may well not have returned.

However, we don’t have an exact number for this.

Also, the timeframe has shifted somewhat since the initial announcement of a 10-day programme of testing, which was made on 12 May.

The Wuhan authorities later said different districts within the city would be starting at different times.

“Each district finishes its tests within 10 days from the date it started them,” the Wuhan Centre for Disease Control said, which effectively extended the deadline beyond the original pledge.

How many have been tested?

All the data we have comes from official sources in Wuhan, and there’s no independent verification for the numbers.

As of 1 June, a total of 9.9 million people had been tested, according to the city health authorities.

They said this marks the end of the mass testing programme.

It’s taken longer to test everyone than the 10-day period that was promised when the plan was first announced.

However, they did manage to collect as many as nine million test samples after 10 days, so nearly the entire population.

That was largely achieved through a significant boost to daily testing capacity.

Before they began the mass testing, there were about 60 centres across the city, with an overall maximum capacity of 100,000 tests a day, according to the official Hubei Daily newspaper.

By 1 June, the authorities said they had 249 testing centres operating.

They also mobilised teams to test old people, and the disabled or vulnerable in their own homes.

There were more than 1,450 testing staff involved.

The other way they sped up the process was to use a batch testing method, which groups individual test samples together.

Reports suggest they used batches of between five and 10 samples in Wuhan, only carrying out individual tests if a batch proved positive.

And as many as 25% of all tests were done using this method.

This is an efficient way to test large numbers of people where infection levels are low, as most batches would produce negative results.

And it appears to have worked in Wuhan because 97% of local communities across the city reported no positive tests, according to the official data.

The authorities said they had found just 300 positive cases (all without symptoms) out of all the tests done, and traced a further 1,174 close contacts of these people.

Send us your questions

Our latest update on COVID-19 (coronavirus)