Marchers defied social distancing rules and a water cannon to demonstrate against Beijing’s plan for new security legislation in the territory. 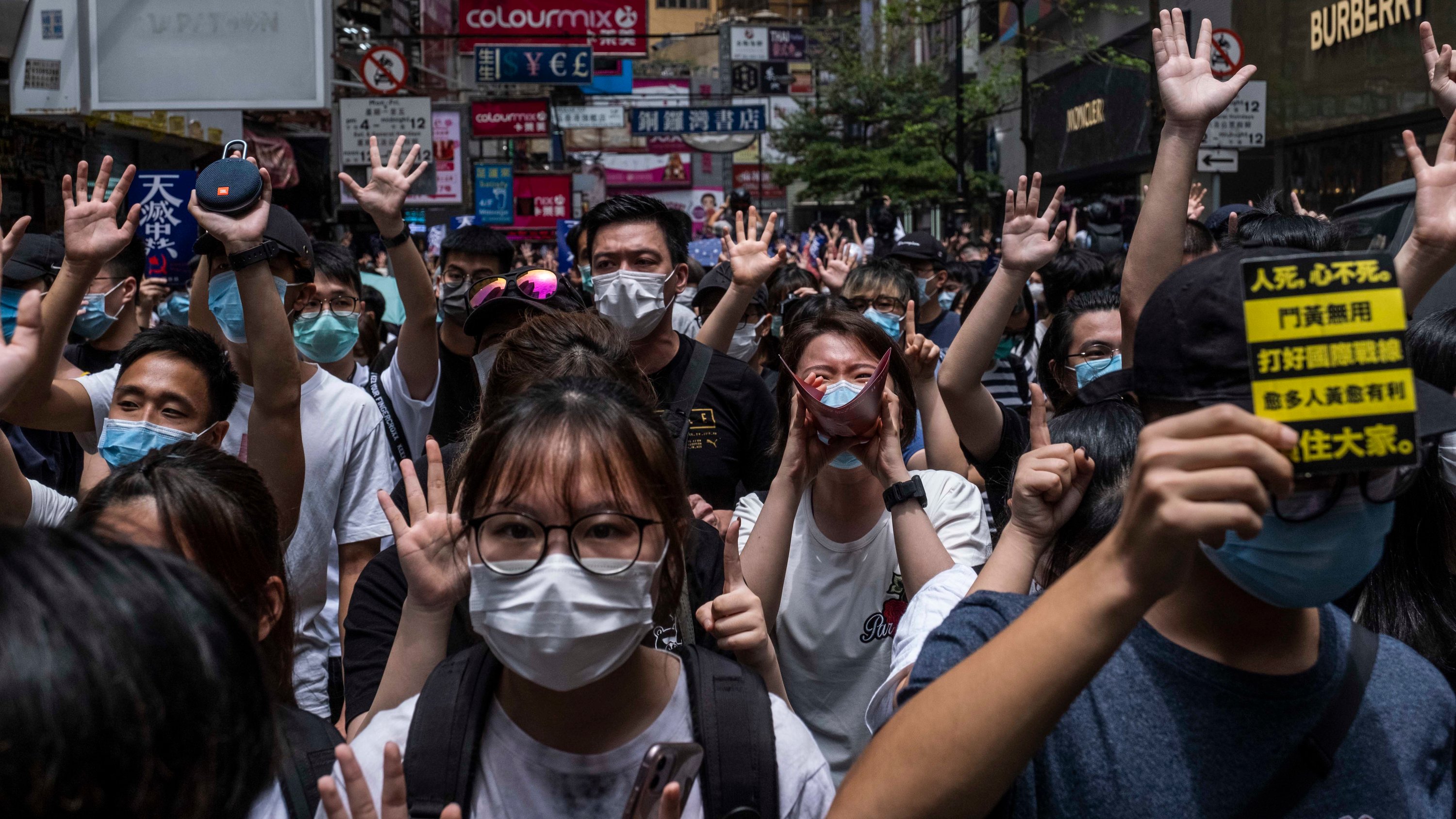 Thousands of Hong Kong protesters clashed with the police, who fired rounds of tear gas, in the first major demonstration since China announced plans to tighten its control over the territory through security legislation.CreditCredit…Lam Yik Fei for The New York Times

HONG KONG — Thousands of protesters swarmed some of Hong Kong’s busiest neighborhoods on Sunday, singing, chanting and erecting roadblocks of torn-up bricks and debris, as the police repeatedly fired tear gas, pepper spray and a water cannon during the city’s largest street mobilization in months.

The protest, the first since China announced plans to tighten its control over Hong Kong through security legislation, was planned as a march between the city’s bustling Causeway Bay and Wan Chai neighborhoods. But when the police blocked the route, firing rounds of tear gas in quick succession, the protesters quickly splintered into smaller groups, setting off more than seven hours of scattershot confrontations.

While the protesters were largely peaceful, periodic clashes left the area choked with haze and littered with broken glass, furniture and police tape. The police patrolled the district’s main thoroughfare with a water cannon, escorted by an armored truck with two officers seated on top, pointing guns loaded with rubber bullets.

The police said that they had arrested at least 180 people, mostly for unlawful assembly, and that at least four officers were injured. The city’s hospital authority said six people had been hospitalized, including one woman in critical condition.

ImagePolice officers in the Causeway Bay district of Hong Kong on Sunday.Credit…Lam Yik Fei for The New York Times

The protest on Sunday — the city’s first large-scale demonstration since the outbreak of the coronavirus pandemic — underscored the depth of many residents’ outrage and fear about Beijing’s national security push. The protesters flouted social distancing rules and police warnings against illegal assemblies to show their solidarity against the security laws, which many fear would strangle the civil liberties that distinguish the city from the mainland.

But the demonstration also made clear the challenges before the pro-democracy movement. Attendance was far lower than for the massive rallies last year against a bill that would have allowed extraditions to mainland China. Some protesters have expressed hopelessness or a new fear of participating in public opposition. The police also showed that they planned to continue a new pattern of assertiveness toward the protests, trying to stop mass gatherings before they occur.

“I keep coming out to protest,” said one attendee, Hanna Ng, 16. “Bad things keep happening, but I don’t know what else to do.”

Several protesters waved flags calling for Hong Kong independence — a call that, though still considered fringe, has gained some traction in recent months as anger at Beijing has grown.

Scores were arrested, and city officials said six people had been hospitalized on Sunday, including one woman in critical condition.Credit…Lam Yik Fei for The New York Times

As the crowd thickened, trams sat immobilized on the rails, with passengers poking their phones out to record the activity. One protester jammed traffic cones under the tires of a minibus to prevent it from moving.

Shortly before 1:30 p.m., the police fired several rounds of tear gas, sending the crowds that had been trying to march westward fleeing into stores and side streets. But the protesters, many of whom had been trained by last year’s street battles to carry gas masks, reassembled as quickly as they had dispersed.

The result was several hours of start-and-stop encounters, with long stretches of tense quiet interrupted by sudden bouts of police officers’ sprinting down a street, firing pepper balls or tear gas to clear the way. At times, they fired pepper spray in close range of protesters and journalists, according to videos on social media.

The police said in a statement that they had deployed tear gas to disperse protesters who blocked traffic and threw umbrellas, water bottles and other objects at officers.

“Some rioters have set fire to debris and hurled glass bottles from rooftops, causing danger to residents and business owners nearby,” the police said, adding that protesters had charged into roads, removed street barriers and damaged traffic lights.

Protesters also reportedly beat a lawyer who had expressed pro-establishment views and smashed the glass of at least one storefront. Some protesters piled umbrellas, wooden boards and overturned trash cans to barricade streets, and a few threw objects at police vehicles.

Groups of police officers pinned protesters to the ground and randomly searched passers-by.

Still, the clashes were relatively restrained, compared to violent clashes that marked the later months of protests last year.

The march on Sunday was planned before Beijing announced its national security plans on Thursday. It was originally intended to oppose a separate bill, in Hong Kong’s Legislature, to criminalize disrespect of the Chinese national anthem. Antigovernment groups see that proposal as yet another indication of the mainland’s encroachment on Hong Kong.

But after the security push was announced, the event took on added urgency for protesters eager to show they would not be cowed.

“I came out today to protest against the evil law China will impose on Hong Kong,” Billy Lai, a 34-year-old social worker, said. “If everyone of us can do a little bit more, I hope we can bring changes to the society.”

Ricky Chun, a retiree, said he had not planned to attend Sunday’s march when it was first announced. But after the national security push, he knew he had to attend.

“This is the only way we can express ourselves,” he said. “We cannot just keep ourselves quiet and take whatever they give to us.”

In Beijing, China’s foreign minister, Wang Yi, said that the protests that roiled Hong Kong for much of last year had posed a grave threat to national security, demonstrating that such legislation was long overdue.

“We must get it done without the slightest delay,” he said at a news briefing.

Tear gas and other police action sent protesters running through the streets in Causeway Bay.Credit…Lam Yik Fei for The New York Times

He sought to assuage concerns that the rules would be used as cover for squelching antigovernment dissent in the city, saying that the move targeted a “very narrow category” of acts.

“Instead of becoming unnecessarily worried, people should have more confidence in Hong Kong’s future,” he said.

In a statement on Sunday evening, an unnamed spokesperson for the Hong Kong government called the protesters “thugs” and the clashes “atrocities.” The day’s events confirmed ”the necessity and urgency of national security legislation,” the statement said.

The Hong Kong government previously tried to introduce security laws in 2003 but backpedaled after mass protests. The city’s government has since avoided reintroducing such legislation, and Beijing’s move signaled its impatience with its local proxies.

It remains unclear how the protest movement will move forward, and whether it will able to replicate last year’s victories. Though the protesters in 2019 forced the Hong Kong government to withdraw the extradition bill, many said the aggressiveness of the Communist Party’s actions had dimmed their faith in the power of protest.

In addition, even as the coronavirus pandemic has waned in Hong Kong, some in the pro-democracy camp have said they prefer to express their discontent in potentially safer ways, such as boycotting businesses seen as sympathetic to Beijing.

Still, those who attended the march said protesting remained one of the most viable options.

“I wouldn’t use optimistic,” Michelle Chung, 45, a theater artist, said of her outlook on the protests. “But I would say that if we do not insist, we will not see hope. It’s because we insist, that hope will remain out there.”

How New Zealand beat the coronavirus

United Kingdom: Coronavirus Update for Employers in the UK